No problem, we have a Live team on hand to assist you. Click Start Now & enter your query.

Discover more by reading the introduction to the document below. To access the full content, download it for free by filling out the form on the right hand side.

Back To Tech Hub 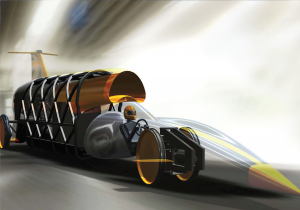 Faster than a bullet.

NX is the design tool of choice for team setting out to smash world land speed record and capture the imagination of
future engineers.

Igniting the interest of future innovators.

How do you fire up the imagination of young people so they want to be the engineers of tomorrow? Invite them to
participate in an engineering adventure for the 21st century – to create a supersonic car capable of setting a new land speed record of 1000 miles an hour. That’s a car swifter than a bullet from a handgun and faster than the low altitude speed record for an aircraft, currently 994 miles per hour.

Launched in October 2008, the BLOODHOUND SSC (supersonic car) project has a dual mission: confront the
impossible and overcome it using Science Technology Engineering and Mathematics (STEM) and in doing so inspire, prepare and motivate the next generation for life in a low-carbon world. The project will culminate in a 90-second attempt to reach a speed of Mach 1.4 in the South African desert at the end of 2011. The car will be driven by the same RAF pilot who set the current land speed record of 763 miles per hour in 1997.

Despite its long history of engineering, Britain has seen a sharp decline in the number of STEM graduates in recent years and the BLOODHOUND SSC project aims to boost program interest by showcasing the engineering endeavor as much as its technical success. All technical information will be shared and made public with the intent of inspiring a new generation of engineers. The government of the United Kingdom (UK) is providing partial funding for the three-year education program that will include curriculum-based materials.

“As a team, we knew we wanted NX as our design tool.”